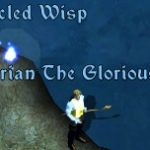 Adrian the Glorious Lord is the good twin brother of Andros the Dread Lord who can be found in the final level of the dungeon Despise:

“Two brothers, both well learned in the arcane arts, lusted for the same woman. She was but a simple maiden, tending to the ranches dotting Britannian countryside, her beauty, however, was without equal. Both men knew should they compete against one another, neither would succeed in bearing fruit with such beauty. So the brothers conspired, and began to corrupt the very fabric of her love. Together the brothers conjured a powerful Polymorph spell to transfigure themselves into the perfect man for the maiden to love. For months they would deceive her love, the maiden unknowingly accomplice to a corrupt triangle. Finally, she gave birth to twins. Despite the powerful magics the brothers used to pursue their ruse, the mother’s love for her children was too great and the brother’s trickery was uncovered. Outraged at such a thing the maiden cast away her lovers forever, cursing them to the Abyss. As the twins grew and their mother aged they would learn of her hate towards their fathers. As each twin grew to adulthood and became their own man, they would blame the other for their own father’s fate, and come to despise one another. Already practiced in their fathers’ art and fully possessing their arcane talent the twins began bartering with the mysterious Wisps. Eventually each convinced the Wisps to conjure an army with which to destroy the other. Their mother, bearing witness to this feud and knowing the dangers of the likely outcome, pleaded with her sons to reconcile. Corrupt with rage, there was no foregoing their anger and so she meditated at the Shrine of Compassion, hoping in her heart of hearts for her sons to end the feud. As she meditated a mysterious Wisp appeared to her and in an instant an eternal pact was struck. The mother’s love was enough to save Britannia from impending war, but her sons, filled with despise would be cast there forever…”