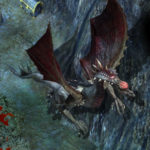 The eldest of the Draconian race are rarely seen by any other than drake eyes. Ancient in origin, the wizened Elder is said to long for the days when the reptile was the guardian of the land now known as Britannia. Patience is not a virtue of the Elder Wyrm, and disturbing one may lead to a quick death. Death, of course, being the quickest way for these ancient ones to be rid of the intruder and get back to their studies.

Ancient texts concerning the draconian race tell of Ahzimas, a wyrm soothsayer of great magical power who claimed reptilian rule would not return to the land until humans and reptiles lived as one. This one statement has apparently been a very heated topic of discussion among draconian scholars. Some believe it means the two races should live in peace, others believe it means that one race must be eradicated. Even stranger, there are those that believe a physical merging of the two races is what was foretold. It is believed that all Wyrms are working toward this goal. How they will reach it is known only to them.

(The attributes of the Ancient Wyrm were increased in 08. The symbol: +/- shows an attribute that was changed, and reflects a current in game Wyrm.)