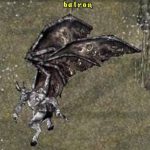 In the depths of hell, they are generals among hordes of daemons that know only war. In Britannia, they are nigh on unstoppable. With mighty hell-forged blades and life draining magical powers, perhaps the only thing Balrons do not possess is subtlety. When you stand nine feet tall and wield an eight-foot blade of hell forged steel, who needs subtlety?

Though in the original single-player games upon which UO is based Balrons were “uber”-bosses, in UO not so much. Currently, they are simply particularly hard Demons, though they can still kill an experienced player who takes them too lightly.

Especially beware of their Paragon form, which occasionally spawns in Ilshenar.