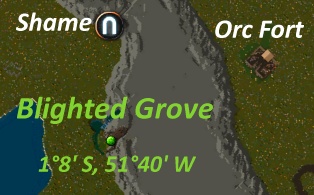 The Blighted Grove is a Mondain’s Legacy (ML) dungeon. Like all ML dungeons, it is home to monsters, named monsters, and a Peerless Boss. Entrance requires a Bone Machete in the top layer of your backpack.

One of the oldest trees in existence, the ancient Yew that is tied to Lady Melisande is twisted and grotesque. Too powerful to die in the swampy ground, as the others of its kind have, its mighty roots draw upon blighted soil to live. The immense trunk and squat shape tilts dangerously, with tangled mud clotted roots exposed along an entire third of its perimeter. The tree leans precariously but endures, the poison of its needles and seeds bringing agonizing death to wildlife that wanders too near. Adventurers enter the blighted grove by passing under the exposed roots of the tree and work their way along the downed branches and the rotted out interior of the trunk. Every aspect of the Yew tree is poisonous and dangerous. Footing within the tree is precarious and with every fall and cut the character is exposed to another dose of the lethal poison.

Roosting in the revolting branches of the tree are hideous harpies. Changelings delight in tormenting characters, while Bog Things, Boglings, Corpsers, Whipping Vines, Swamp Tentacles, and Reapers are much in evidence. Giant serpents and monstrous hydras weave their way through branches and swampy ground. Enslaved and insane dryads and satyr serve Lady Melisande.