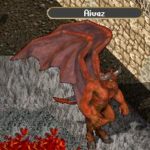 No purer manifestation of primal evil exists than the hideous daemon, a denizen of the dark and infernal planes brought to these shores by the most vile wizardry. Only the greatest of heroes have ever vanquished a daemon in single combat, and even a group of valiant warriors must be mighty indeed to survive an encounter with such a fiend.

Daemons are rapacious, and find man-flesh as good as any other meat. They also have a great love for gold, and will hoard it when they can. When not about their business of bloody deeds and diabolic mischief, they prefer to sojourn in caverns below the ground. They are especially thick in the deepest recesses of the legendary dungeons, where they combat invaders from the surface with their wits, their strength, and their magic. Daemon’s bones are greatly prized as magical talismans of rare potency, if a warrior survives long enough to bring them forth from bloody combat.