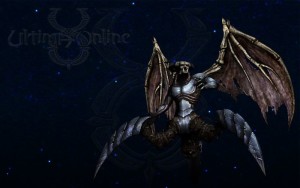 Exodus was a villain in Ultima lore, the spawn of the evil wizard Mondain and consort Minax.

In Ultima Online, Exodus was based out of Ilshenar, in a dungeon (aptly called Exodus Dungeon by most and “Power Core” by some) in the central region of that facet. His meddling in the timeline of Ilshenar caused the official fiction of that facet to change. He was behind the invasions of certain cities by the Juka, together with Lord Blackthorn in 2003. Indeed, it is Exodus who is credited with “assisting” Blackthorn’s transformation from philosopher of Chaos and spoiled, embittered nobleman to full-fledged agent of evil. Exodus was not actually seen in-game in UO, but it was said in February 2003 by Dawn, a Royal Knight of the realm (see: Order of the Silver Serpent for more on the Royal Knights), that Exodus had greatly faded and that his power was waning in Ilshenar, following the death of Blackthorn.

In 2012, during the Call To Arms event that is part of The Awakening epic story-arc, Exodus took advantage of civil unrest and a weakening of the boundaries between planes to attempt to subvert Britiannia. Various clues soon pointed to Ilshenar and specifically the Exodus dungeon. This invariably concluded with adventurers assaulting the dungeon, led by a recently returned Dupre, and destroying Exodus in a final confrontation that was notable for the introduction and distribution of a rare item, the Scroll of Valiant Commendation.

In classical Ultima lore, from the single-player games, Exodus was the prodigy of Mondain and Minax, and alludes to “it” being a sentient computer of some kind, programmed by the use of four different punch cards. The highly mechanized features of the Exodus dungeon in Ultima Online appear to back that up to some degree.

Released with Publish 79 a new peerless has arrived with a whole new system paraphrased as The Exodus Encounter. It is in a way new as key gathering can be done via three different means (Warrior, Rogue, Craftsman). The summoning of Exodus requires at least two partied players. Among the unique drops the Scroll of Valiant Commendation (replica) is included, a scroll that allows for more stat points than previously attainable. For more details please refer to the main article.