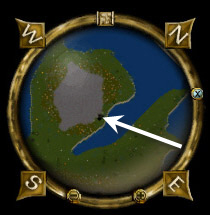 Located West of Wrong, the Ice Dungeon was introduced when the Lost Lands appeared as one of the passages between Britannia and the Lost Lands. As the name indicates, this dungeon has a winter or arctic theme. It is home to all kinds of snow- and ice-related creatures.

This is one of the smaller dungeons; there are only three levels, two of which can be considered as merely rooms. 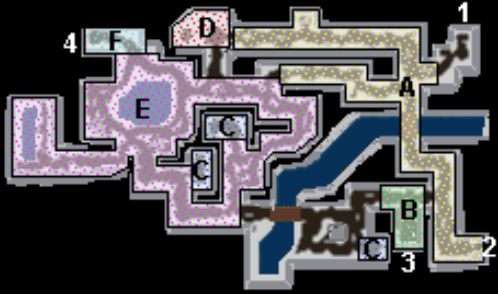 This is the main level and where most of the action goes on. The area just past the White Wyrm location (E), is host to a powerful grouping of melee and magic opponents; one is advised to head quickly through this area.

A large room containing a large fort that is crowded with Ratmen of all kinds (Normal, Mage and Archer). There is absolutly NO good reason to ever go here. Ratman Archers and Ratman Mages together mean quick death! If you want to fight Ratmen for the loot, there is a much healthier spawn in Level 1 in front of the passage to Level 2.

Looks like a basement flat and is completely empty save for the few Ice Fiends that spawn here. According to Stratics, a mage must have lived here long time ago and something went wrong and now there’s a hole in the floor that keeps on spitting Ice Fiends into Sosaria. In Felucca, the Ice Fiends spawn in such a manner as to encourage “campers.” In Trammel, some of the Ice Fiends spawn on the Level 1 stairs, thus rendering it a poor place to seek continuous battle against such icy Fiends.

Ice offers some very unique hunting opportunities! Due to the fact that the whole dungeon closely follows the cold theme, it’s very easy to dress up properly for this dungeon. Simply bring along very high Cold Resist armor (60+) ! Of course, you will need the other resistances too, since some monsters here cast spells. Melee damage is almost completely Physical Damage or Cold Damage. When it comes to the choice of weapon, the exact opposite is required since all the monsters in this dungeon have an EXTREMLY low Fire Resistance. An Ice Slayer talisman goes a long way in this dungeon.

Probably one of the easiest sources of Fame, Karma and gold! Look for the spawn close to the passage to Level 2. There’s plenty of space to fight the that has absolutely no spawn. If you bring an Ogre Slayer with high Fire Damage, they go down like flies. The same applies for Ogre Slayer spellbooks in combination with Explosions and Flamestrikes spells. Most go down after one Explosion-Flamestrike-Explosion combination when your Spell Damage Increase is high enough. Archers also have a very easy job here since they have no ranged attack and become significantly slower with decreasing health.

There is a large hall in this dungeon with a small corner in which a single Arctic Ogre Lord and a couple of high level dungeon treasure chests spawn. Since there is no other spawn nearby, this is a great place to kill lots of them. The main reason to kill Arctic Ogre Lords is for their great loot and the very good Fame and Karma level they give. You can become Glorious Lord/Lady just doing these baddies (and earn a small fortune to boot).

The Ratman fort entrance is very close by and sometimes they are lured into the Arctic Ogre Lord’s hall by other players. Especially Ratman Mages can do nasty damage when in groups and frost ooze will damage your weapon when hit.

Also a very rich spawn of Snow & Ice elementals as well as Frost Trolls and another Arctic Ogre Lord is just around the corner and might result and a tight situation if lured into the Arctic Ogre Lords hall.

This place is pretty crowded during peak times so you can either take turns or come here at less busy times.

As with most creatures in this dungeon, high cold resist and high fire damage is a must! When hit by an Arctic Ogre Lord with low cold resist you can easily take 60 damage or more. Don’t even bother to try any poison or cold damage on this beast since it won’t hurt him much. If possible, bring Ogre/Repond slayer along and it will become really easy. Consecrate Weapon is very effective here since the Arctic Ogre Lord has extremely low fire resist.

As a mage you might either want to cast fire spells (Explosion, Flamestrike, Flamestrike) or summon Energy Vortexes. Does not dispell.

The White Wyrm is another amazing creature in this dungeon that can be easily slain when using the right tactic. First of all, always approach their spawn from the east since there is no significant spawn in that direction. Additionally, you can safely retreat in that direction in case they teleported on you and really hit you hard. Let’s hope they don’t do that too often! A Dragon Slayer spellbook and lots of fire damage spells like explosion, flamestrike and fireball are in order here. Necromancers should cast Corpse Skin on them for the additional fire damage. Same thing applies for an archer, get a dragon slayer bow with high fire damage and fire away. I wouldn’t melee them solo though as they do hit hard! White Wyrm’s have great loot, so put on some luck to boost it. Check the loot and never forget to cut the corpse for valuable Barbed Hides. 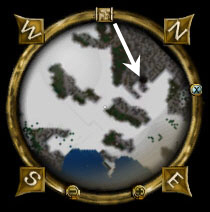 From Britannia through Ice Dungeon is a passage to the Lost Lands. If you travel this route bring a boat, for you will find yourself in the frozen wind swept North, known as Kos Heb West. This area is cut off from the mainland by the sea. 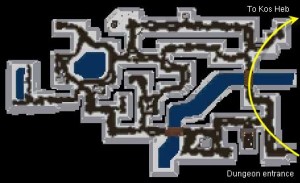