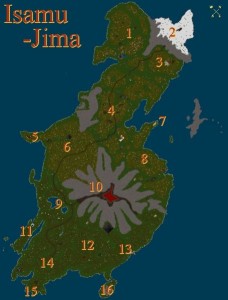 Introduced in 2004, Isamu-Jima is the largest island in the Tokuno Islands group. Accessible by moongate, the island is dominated by the stratovolcano, Mount Sho. However, there are several other locations on the island that offer both challenge and reward.

Isamu-Jima has a road that nearly runs its entire length, from the Isamu-Jima Moongate in the south to the Winter Spur in the icy north. Look for the ferret racetrack off of the northeast flank of Mount Sho and the Shrine of Isamu that is located off of the northwest flank. There are also about a dozen islands that surround Isamu, including Mount Hakonu, the small volcanic island off the eastern coast.

A place to hunt the Rune Beetle without a Yamandon present.

4. Valley of the Sleeping Dragons

The name implies the resident, as the Rai-Ju is the thunderous companion to the Shinto god of lightning.

If it is Rune Beetles you seek, try Beetlescape mentioned above.

The eastern slope contains undead, while the volcano proper has fire-based creatures.

Healers can usually be found around the pavilions to the north and northeast of this open area.

The sea has seemingly flung her dead upon Storm Point, as undead and ship wrecks are present here.