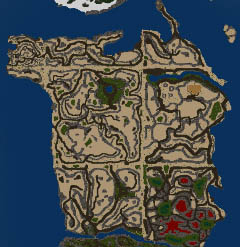 The Lost Lands Desert is most of the large land mass above Papua. It is a sandy, rocky region, with a few grassy areas. In the North is a small body of water, referred to as the Oasis.

In addition to the Ophidian Lair stronghold, the snake men now have major footholds in the West and North/West areas of the desert. The Titan and accompanying Cyclopian Warriors can be found in the far North/West corner. The single Sphynx is located in the South central area on a plateau. Wildland animals are concentrated around the few grass spots: above the Ophidian Lair, and near the Sphynx.

By far the single most dangerous creature in the desert is the Toxic Ooze. A small number of them sit on the trail, above the main Ophidian stronghold. Be prepared to trek all the way back to Papua, if you are in need of a healer. 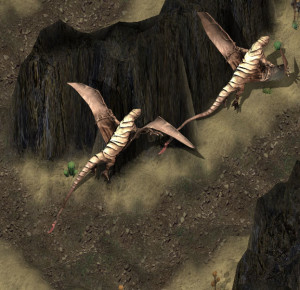