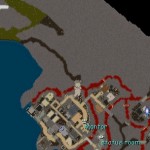 Like many on facet Ilshenar, the City of Montor is a ruined version of its former self. Located on Termir Flam, which means Lake of Fire, various demonic creatures creatures spawn here. A lava pit in the Northeast section of the city is labeled on UO Automap as a “Gate to the Abyss”. A Demon Slayer weapon/spellbook and a Flame Slayer Talismanwould be of assistance here.

The nearest Moongate is near the Shrine to Chaos.

There is not much official fiction on Montor:

The people gathered in the northeast area of the world (Ilshenar) and established a city on a mountainside calling it Montor. Long ago in Sosaria another town of the same name had existed in, ironically, the lands ruled by Lord Britishhimself. At first I thought the name was just a reuse of a familiar town but you can translate the name to mean “Mountain Passion”. The later seems to ring true. In other texts it is listed as Mont-Or. The later name would befit a new city with people who survived such a catastrophe. This new city took about 40 years to complete. It was, by all accounts, a paradise of city and mountain with waterfalls that cut between buildings and the mountainside. In the years that followed Ilshen and a council of scholars set up laws and government and peace reigned.

Then twenty years after its completion Montor was destroyed. We still are missing pieces of all that transpired but it seems the mountain Montor was built on had a volcanic eruption. The city’s present state would back that up fully. It would also appear that the people knew it was going to happen and evacuated.

For more lore on Montor and Ilshenar, see