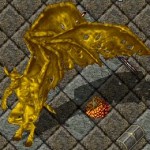 Paragon refers to an über-version of the creatures that spawn in Ilshenar. Introduced with Ultima Online: Third Dawn, the enhanced challenge of Paragon creatures necessitated an enhanced reward.

There is a 5% chance, or 1-in-20, that any creature that spawns in the Ilshenar facet will spawn as a Paragon of its type. Such creatures appear in a special color known as “Paragon Gold” and have the term “(Paragon)” appended to their titles.

Paragons are noticeably more powerful than the normal creatures of their type. They take longer to kill, hit harder, have more powerful magic, very high health regeneration, and run very fast (thus making them difficult to escape from). Furthermore, they actively target from much further distances and also tend to re-target to anything that moves around them (though the use of the Teleport spell is safe after initially entering their range of sight). Fast and far is part of the enhanced challenge.

The slaying of Paragon creatures may cause minor Artifacts to drop in your backpack. Ilshenar Minor Artifacts are awarded randomly upon the death of any such creature depending on it’s Fame and your character’s Luck.

Also, any creature that would normally drop a Treasure Map will, when spawned as a Paragon, produce a “Paragon Treasure Chest” instead (but only if a map would have been included in the loot). These chests, which must be opened using the Lockpicking skill, come with a treasure map that is one level higher than that normally provided as loot by the creature. The “Paragon Treasure Chest” will have the name “Recovered from creature name (Paragon)”. The chests come in random hues, including a dark black and a bright white hue, which are often referred to as semi-rare.