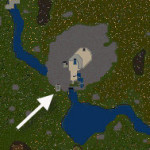 Ilshenar was a new landmass introduced with the Third Dawn expansion. You can learn more information as well as find more interesting places by viewing the Atlas.

From the Valor moongate head South and cross the bridge. Follow the river South, until you find the entrance into the mountain known as Terort Skitas. As you look above, you will begin to glimpse a tranquil temple of knowledge itself. 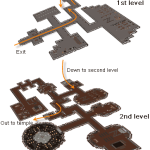 Terort Skitas, which translates Tower of Knowledge, also marks the entrance to Sorcerers Dungeon. To reach the the temple one has to make their way through two levels of this dungeon.

When the Gem of Immortality was shattered an image of Sosaria was captured in each of the broken shards. Each shard from that point further, as far as we can tell, has its own history and peoples.

In Ilshenar, Ilshen took to organizing the people and restoring order. He began the rebuilding of civilization. The people gathered in the northeast area of the world and established a city on a mountainside calling it Montor. Twenty years later Montor fell.

As people fled Montor, they came to Terort Skitas. The temple became a center of learning. It was a place for study and reflection. One would guess this great libray might have rivaled our own Lycaeum. 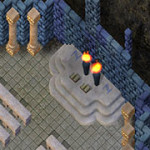 If you have survived the dungeon, you will be greeted by the sounds of water. As cascading falls run through the three stories of the temple. Occasionally a Wyvern might be wandering about, but often the place is empty. Inside, upon the altar sits the books of knowledge.

As in the dungeon itself, reaching some areas of the temple are done by magical means. You will find stairs to the second story. However, to get to the top floor you will need to find one of the two sets of flashing crystals. They are green and blue, and will take you to their matching cousins by clicking on them twice. 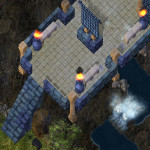 Outside and down below there is a grassy outcropping, which provides views of the Valor Jungles.