The boulder strewn Valor Forest extends North/West from the Pormir Felwis River to the Valor Moongate, and East to the Pass of Karnaugh. Tucked into the Northern mountains is the Cyclops Camp. Toward the center of the forest there is a healer’s hut. 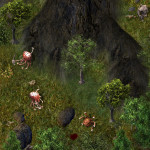 The forest is not densely inhabited. The Elder Gazers are the greatest threat, and are ususally found around the Valor gate.