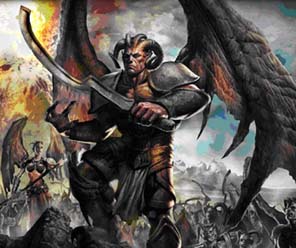 Community-minded and strongly principled, the Gargoyle race is powerful in both magic and combat, and is renowned for their superior craftsmanship, particularly with unusual materials.

The Gargoyle Race is a race of playable creatures introduced with the Ultima Online: Stygian Abyss expansion.

When Ultima Online was first released, Humans were the only playable race. With the release of Mondain’s Legacy, Elves became the second race. Gargoyles are the newest playable race with the Stygian Abyss expansion.

Gargoyle player-characters are not affected by Gargoyle Slayer weapons.

The Gargoyles are often mistaken as demons but are in fact a proud mystical race with an ancient history.

Gargoyles have no hair on their bodies. Their horns come in several varieties and sizes and are usually left unadorned.

Gargoyles have been a part of Ultima lore since Ultima IV: Quest of the Avatar, one of the most popular titles from the single-player series of Ultima games. Gargoyles have been known for their deep-held beliefs, including a belief system apart from the Eight Virtues of Lord British. They are also known as skilled artisans with their own secrets of crafting powerful items.