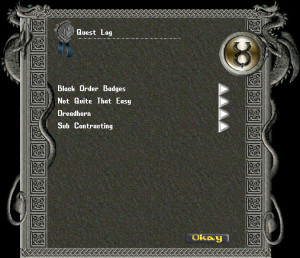 Quests are small, directed adventures or missions whose completion usually result in rewards, such as gold and magical items. Quests are received from various NPCs throughout the game world who are marked with the title “Quest Giver.” Some areas in game are only accessible upon the taking or completion of a particular quest or quests. Quests may be chained together, so that a player must complete them in sequence.

The newest quest engine, which was introduced in Ultima Online: Mondain’s Legacy, allows for hundreds of new quest options, including the opportunity to engage in multiple quests at the same time. Some quests are very simple in nature – seek out a certain monster and kill it, for example. Others require you to explore new dungeons or areas of mystery. Still others involve crafting, and reward you with new runic kits or crafting recipes. You can even change your race through questing. The quest opportunities are endless and there is something for everyone. 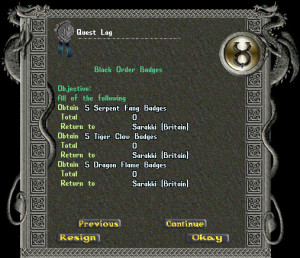 In addition to the Classic quest engine, and the ML-introduced quest engine, for special events it sometimes appears as though a third engine is utilized.

For examples of such quests, see Halloween 2008 Quest and Royal Council Massacre.

The chief difference between the Event Quests and the other 2 quest engines described in this article is that the Event Quests are dialogue-driven rather than menu-driven. The quests are accessed by saying certain key words to NPCs. These discussions then trigger certain events, or open up certain areas, or point the way to pre-existing areas.

For more details on the differences between the Classic and ML quest engines and the Event Quests, it is best to visit the 2 articles linked to above, and learn by studying the examples.

Certain events run by Seers or Event Moderators can also said to be “quests,” though because they rely mostly on interactions with actual persons they cannot said to use “quest engines” per se.

The Place of Quests in UO

Players have long had an ambiguous relationships with quests in UO. UO is often taken to exemplify the “sandbox” approach to online games (wherein what the customer pays for is, mostly, a gaming environment, and any meaning to what goes on within that environment is created by the players). This is in opposition to the “directed experience” approach, wherein there is a greater availability of manufacturer-supported meaning to what goes on. (In UO, for example, most of the time, PCs killing orcs are doing so for their own reasons; in World of Warcraft, by contrast, it would be far more common to kill orcs, or some other creature, at the behest of some NPC.)

The presence of formalized, NPC-driven and manufacturer-created quests violates a “pure” “sandbox” approach somewhat, and thus their presence in UO has been controversial among some players.

However, quests have long been a part of UO, to one degree or another. NPCs would offer tips about recently-spawned magical items in dungeons, in exchange for gold. (The Event Quests mentioned above bear certain obvious and unexplained similarities to these older item-hunt quests.)

Further, the “Escort” quests, so neatly folded into the Mondain’s Legacy quest engine, were in fact around a very long time, considerably pre-dating the pre-ML Classic quest engine as described in this article.

When the Classic quest engine was introduced, around the time of the appearance of the ant-like Solen race, it was said by players on message boards that the engine bore similarities to another game, Everquest. The newer, ML quest engine was said, again by players who post on message boards, to be similar to World of Warcraft, which had since come to far-displace Everquest as the most popular game of this type.

Why the quests from the Classic engine could not be folded into the ML quest engine appears to have never been discussed by the game manufacturer. The presence of at least two quest engines is a common source of confusion and complaint among new players.