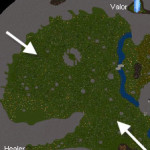 From the Valor Moongate turn South through the forest, and find the bridge over Pormir Felwis River. From there you will enter the large, dense expanse. From the bridge, Valor Jungle extends South all the way toward the Memorial to Gwenno. 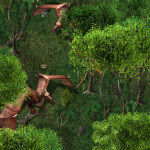 In the North central area sits the Valor Champion Spawn. To the South, Bandit Town. Dragons are found concentrated around the edge of the Northern mountains. The relatively few jungle animals are scattered throughout.